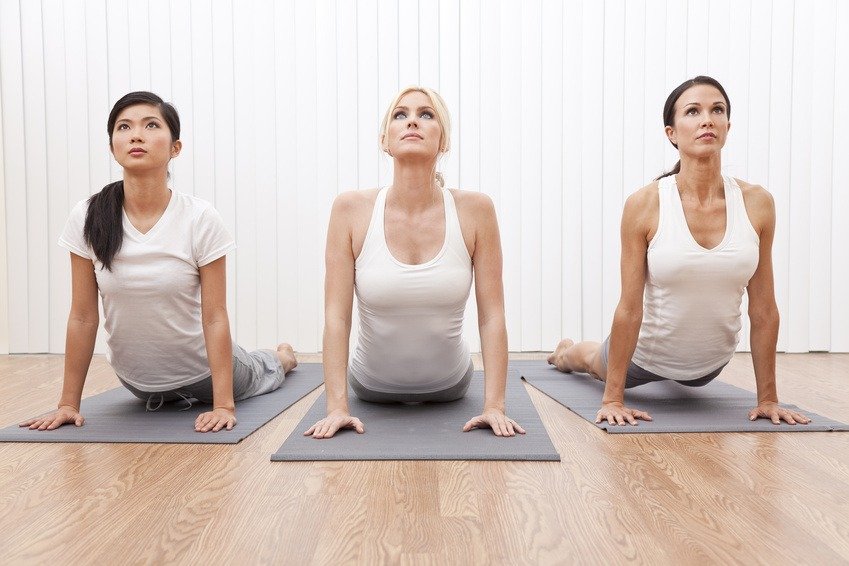 Vinyasa yoga is the practice of unites the breath with movement. This practice varies from other yoga practices what employ a more “static” approach to a constant “flow” of poses which is called the “dynamic flow” The amount of time of one’s breath marks out the body’s natural time it needs to take moving between poses. Some poses are held for a set amount of breaths to reap maximum benefit from the series.

Vinyasa is translated from Sanskrit meaning “connection” and follows a specific series of movements that are frequently done between each pose in a series. Vinyasa flow yoga belongs to the family of yoga that includes the Sun Salutations. For example a standard vinyanas trait which is also marked out in the classic sun salutation series is to, from a seated position, jump back into a plank, from here to upward facing dog, then downward facing and ending with a jump through into the next pose.

Vinyasa Yoga engages a breathing technique that relaxes the diagram allowing the abdominals to inflate freely. This method of breathing also called “free breathing with sound” and opens the throat chakra. The rhythm of the breath as one inhales and exhales gives the practitioner a sense of peace and a focus point to allow him or her to disconnect from ones surroundings.

It has been said that Vinyasa yoga is designed to “keep the fire burning” this is due to the breathing technique employed which creates an internal heat which is said to cleanse the body, improve circulation and eject toxins via perspiration.

A Vinyasan yoga class has a formula that must be followed. The yoga class will comprise of: an opening sequence, one of the main six series, a back bending series, a set of inverted poses to finish

This website uses cookies to improve your experience while you navigate through the website. Out of these, the cookies that are categorized as necessary are stored on your browser as they are essential for the working of basic functionalities of the website. We also use third-party cookies that help us analyze and understand how you use this website. These cookies will be stored in your browser only with your consent. You also have the option to opt-out of these cookies. But opting out of some of these cookies may affect your browsing experience.
Necessary Always Enabled
Necessary cookies are absolutely essential for the website to function properly. These cookies ensure basic functionalities and security features of the website, anonymously.
Functional
Functional cookies help to perform certain functionalities like sharing the content of the website on social media platforms, collect feedbacks, and other third-party features.
Performance
Performance cookies are used to understand and analyze the key performance indexes of the website which helps in delivering a better user experience for the visitors.
Analytics
Analytical cookies are used to understand how visitors interact with the website. These cookies help provide information on metrics the number of visitors, bounce rate, traffic source, etc.
Advertisement
Advertisement cookies are used to provide visitors with relevant ads and marketing campaigns. These cookies track visitors across websites and collect information to provide customized ads.
Others
Other uncategorized cookies are those that are being analyzed and have not been classified into a category as yet.
SAVE & ACCEPT
WhatsApp Chat
Send via WhatsApp