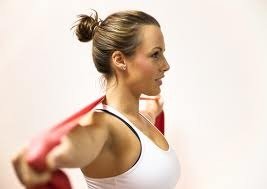 Shoulder biomechanics and correcting spinal misalignment has been proved to have a positive effect to both adhoc, and chronic neck and shoulder pain. Pilates is an exercise method that concentrates on improving spinal alignment and posture, flexibility and core control using boimechanics.

Recent studies have shown Pilates as an effective rehabilitation method for improving correct alignment between the arm and the trunk of the body, as well as improving strength, flexibility and movement between these body parts.

Recently, another study was made to understand if Pilates could be used as a rehabilitation method for the neck and shoulder. The study was hosted at the Jewish Rehabilitation Hospital, based in Montreal. Nineteen subjects were engaged all of whom undertook two one hour session of Pilates per week. Two assessments, were performed, the first after 12 weeks the second after 24 weeks after the initial start trial date. The subjects were observed and tested to evaluate any change to their, postural stance while sitting, abdominal strength and shoulder range of motion including maximum shoulder flexion.

After 24 weeks of Pilates the subjects were found to have a reduced static thoracic kyphosis (posterior upper back curve) while seated and their abdominal strength had increased. The subjects also had benefited from better alignment of their posterior and medial lateral scapular leaving their shoulder blades sitting flatter on the upper spine rather than being abducted. Another observation noted was an improvement in their upper thoracic extension (lengthened upper spine) and lumbar lateral flexion (ability to bend sideways). The cervical erector spine (the neck) had been strengthened on the side of the trained shoulder as had the rhomboid muscles. Finally the lumbar erector spine (bottom of the back) had reduced activity on the side of the injured shoulder while exercises were being performed during exercises such as; shoulder flexion task.

Kim Emery, the lead scientist in the study stated that “The Pilates training program was effective in improving abdominal strength and upper spine posture as well as in stabilizing core posture as shoulder flexion movements were performed. Since deficits in these functional aspects have previously been associated with symptoms in the neck–shoulder region, our results support the use of Pilates in the prevention of neck–shoulder disorders.”

For more information contact us here and we will respond as soon as possible.

This website uses cookies to improve your experience while you navigate through the website. Out of these, the cookies that are categorized as necessary are stored on your browser as they are essential for the working of basic functionalities of the website. We also use third-party cookies that help us analyze and understand how you use this website. These cookies will be stored in your browser only with your consent. You also have the option to opt-out of these cookies. But opting out of some of these cookies may affect your browsing experience.
Necessary Always Enabled
Necessary cookies are absolutely essential for the website to function properly. These cookies ensure basic functionalities and security features of the website, anonymously.
Functional
Functional cookies help to perform certain functionalities like sharing the content of the website on social media platforms, collect feedbacks, and other third-party features.
Performance
Performance cookies are used to understand and analyze the key performance indexes of the website which helps in delivering a better user experience for the visitors.
Analytics
Analytical cookies are used to understand how visitors interact with the website. These cookies help provide information on metrics the number of visitors, bounce rate, traffic source, etc.
Advertisement
Advertisement cookies are used to provide visitors with relevant ads and marketing campaigns. These cookies track visitors across websites and collect information to provide customized ads.
Others
Other uncategorized cookies are those that are being analyzed and have not been classified into a category as yet.
SAVE & ACCEPT
WhatsApp Chat
Send via WhatsApp